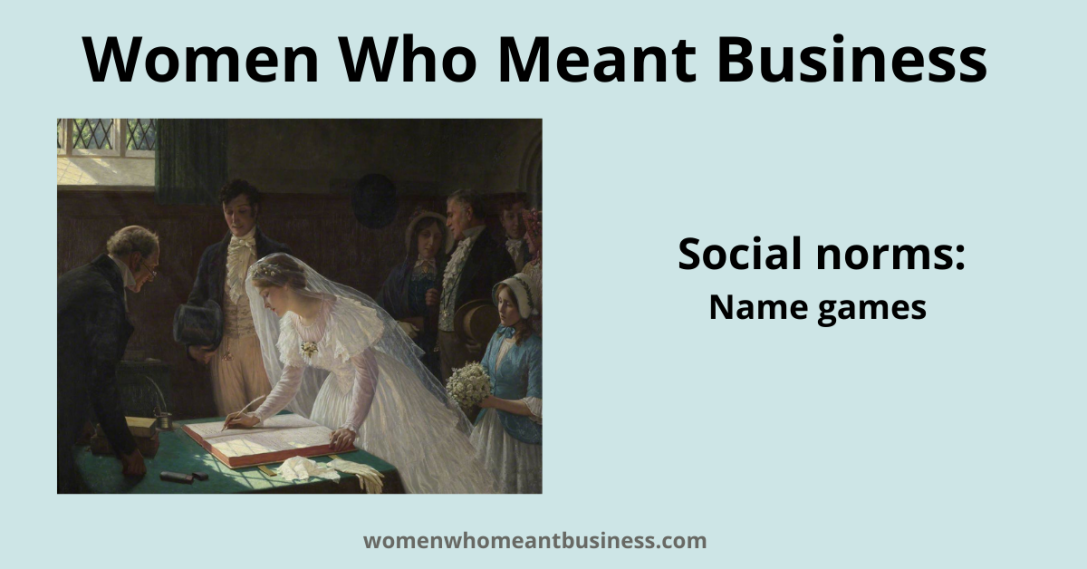 A blue plaque was recently unveiled to Helena Normanton (1882-1957), a pioneering barrister who in the 1920s was also the first married woman to hold a passport in her maiden name. Women born in English-speaking countries have long been faced with a challenge when tying the knot with a man: what to do about their names. I say women because in these situations it is usually assumed that men will carry blithely on with the surname they were born with whatever their wives decide to do. (Those of us old enough to have enjoyed Ab Fab might remember this line from Bubble when Yasmin Le Bon was riding high in the 1990s: “Yasmin Le Bon is ill… her husband’s just phoned and said “Simon Le Bon” which I thought was really amusing – very modern of him to have taken his wife’s name’. John Lennon, on the other hand, really did change his name by deed poll to include Ono, though as-well-as rather than instead-of Lennon.)

The name-change issue has been around for some time. Surnames arrived in Britain with the Normans in 1066 and they also brought with them the concept of coverture, whereby women and men assumed one single financial identity when they married. This meant that married women were unable to retain any money or property in their own right but were also not separately liable for any debts. Over time, this mutated into a concept of women becoming their husband’s property on marriage. It became common practice for a woman to take her husband’s name when they married, signifying this important change in her legal status. The legal rights of married women in Britain have been clawed back bit by bit, starting with the Married Women’s Property Acts of 1870 and 1882 and it was only in 1990 that British married women were legally entitled to ‘enjoy independence and privacy in their own tax affairs’.

Although women now retain their own legal identity on marriage, many still choose to take their husband’s name. However, there are other options. What might come as a surprise is that nearly all of these options were already being used by a handful of British women over a hundred years ago.

One name for work, one name for home
Women working in fields where name recognition matters are understandably reluctant to mess with their brand and the same was true in the Victorian era. There are several examples of actors and artists who retained their maiden or stage name when they married, including Ellen Terry, Lena Ashwell, Janet Achurch and Henrietta Rae. Louise Jopling (1843-1933), had already changed her name twice by the time she married her last husband, George Rowe, in 1887 so she stuck to Jopling for work and added Rowe for social occasions.

Maiden name incorporation
This is more popular in the US but a hundred years before Hillary Rodham Clinton, the UK had medic Elizabeth Garrett Anderson and her campaigning sister, Millicent Garrett Fawcett. who both continued to use their maiden names in addition to their husbands’ surnames. Elizabeth’s children, Louisa and Alan, also used their mother’s maiden name as an integral part of their name.

Another woman who adopted this approach was Ethel Ayres (1874-1923), an accountant who specialised in tax-related issues and was active in the Women’s Tax Resistance League. She called herself Ethel Ayres Purdie after her marriage in 1897.

A new double-barrel
Although Brangelina used the surname Jolie-Pitt for their children, Brad never took the ultimate step of changing his own surname. Probably just as well in hindsight. However, a few Victorian couples made the ultimate commitment by creating a new identity for themselves after they married. Suffragist and social campaigner, Anne Cobden (1853-1926) and Thomas Sanderson joined their surnames after their marriage in 1882. Isabel Cooper (1854-1914), milliner and co-founder of a small restaurant group in the 1880s, married Albert Oakley in 1884, at which point they became the Cooper-Oakleys. The same approach was adopted by committed suffrage campaigners Frederick Lawrence and Emily Pethwick who both used the surname Pethwick-Lawrences after their marriage in 1901.

Mrs plus maiden name
Ms wasn’t a thing in the Victorian era so Florence Fenwick Miller (1854-1935), journalist and editor of the Women’s Signal newspaper, took an innovative approach when she married Frederick Ford in 1877: she simply started calling herself Mrs rather than Miss and left the rest of her name as it was. And just in case anyone missed the memo, she sent a letter to The Times, announcing this ‘mutual desire’. She was a member of the London School Board and some members tried to kick her off because her name was ‘illegal’ but they failed and in so doing established that there was no legal basis for women taking her husband’s name. A twist on this came from Emily Massingberd (1847-1897), co-founder of the Pioneer Club. A widow, after her father died in 1887 and she inherited the family estate, she changed her name back to Massingberd by royal licence but kept the Mrs.

The mash-up surname
This is so far only a modern phenomenon (step forward Dawn Porter, who adopted the surname O’Porter when she married Chris O’Dowd). But I live in hope of finding a Victorian equivalent.

Related posts: Call her by her name