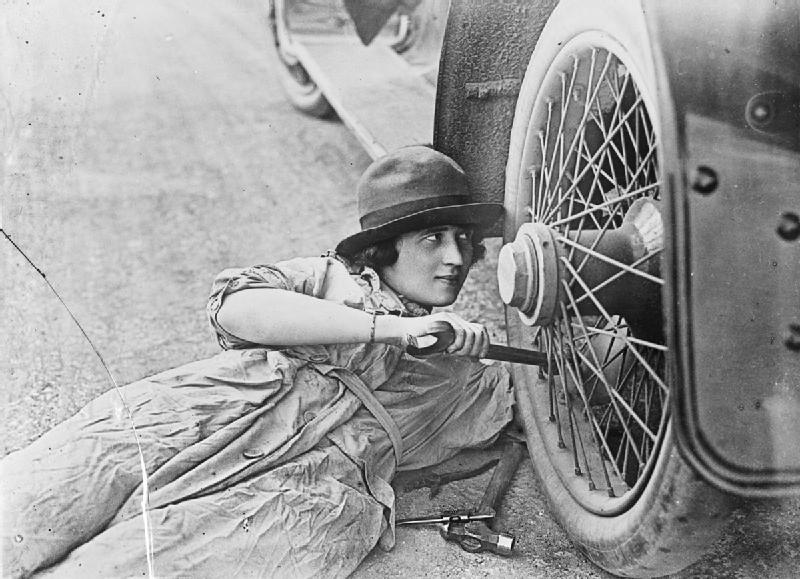 The First World War opened up many fields of work previously closed or semi-closed to women. They started working as conductors, bus drivers, mechanics and chauffeurs. They became window cleaners and crane drivers. Over 100,000 volunteered for the Women’s Land Army and the number of women in the rail industry went from 9,000 to 50,000.

The Shell Crisis of 1915 resulted in the creation of the Ministry of Munitions that year, led by David Lloyd George, and by 1918 nearly one million women were employed in some aspect of munitions work. Textile workers who had lost their jobs at the start of the war when demand plummeted as well as women who had previously been in domestic service filled the factories. Women including Laura Annie Willson and Constance Spry stepped into leadership roles, managing operations and looking after women’s welfare. Women were recruited into the police force, initially deployed to patrol areas around these factories where thousands of women were now working and living. The writer Rebecca West visited some of these factories in 1916 and wrote a series of essays, ‘Hands that War’, published in the Daily Chronicle.

By November 1918, 100,000 women were estimated to be serving in the newly-formed Women’s Army Auxiliary Corps, the Women’s Royal Naval Service and the Women’s Royal Air Force. Hilda Hewlett‘s factory in Luton was churning out planes and Lena Ashwell‘s concert parties were entertaining the troops. The Queen Alexandra’s Imperial Military Nursing Service (QAIMNS), founded in 1902 grew from 300 in 1914 to over 10,000 nurses by the end of the war.  Dr Elsie Inglis founded the Scottish Women’s Hospitals and sent teams to Belgium, France, Russia and Serbia. After initially travelling to France to work there, doctors Flora Murray and Louisa Garrett Anderson were asked to come back to London and set up a hospital on Endell Street in Covent Garden, staffed almost entirely by women, where 26,000 casualties were treated during the War. Overall the percentage of women in paid employment went from 24% in July 1914 to 37% by November 1918.

Honours for the living
On 22nd June 1917, it was announced that King George V had instituted a new Order of the Empire ‘in recognition of the manifold services, voluntary and otherwise, that have been rendered by British subjects and their Allies in connection with the war’, and that its five orders would be given to women as well as men. All are still awarded today: Dames / Knights Grand Cross (GBE); Dames / Knights Commander (KBE); Commanders (CBE); Officers (OBE); and Members (MBE) of the British Empire.

When the first list of awardees was announced on Friday 24th August, 1917, 206 men and 60 women were recognised. Five women and thirteen men were awarded the top honour. One women made a Dame Grand Cross was Katherine Furse, seen here in a painting by her artist husband that now hangs in Tate Britain.

She joined the Voluntary Aid Detachment (VAD) in 1909 and when war broke out was chosen to lead the first unit sent to France. She was made Commander-in-Chief in 1916. Gertrude Bell was another famous name to feature on this first list, awarded a CBE for her special war work in the East and valuable service to the Red Cross. Louisa Garrett Anderson and Flora Murray were also awarded CBEs as was Lady Priscilla Norman, who had spent the early years of the war running a hospital in Wimereux, France. Six days after the announcement Priscilla’s brother, Francis McLaren, who had married one of Gertrude Jekyll‘s nieces, Barbara, was killed in a flying accident.

There was OBEs for Lena Ashwell and Ethel Wood, who had been the Honorary Organiser of the London War Pensions Committee and would soon make her mark in the world of advertising, and an MBE for Laura Annie Willson.

Also announced at the same time were 53 Medals of the Order of the British Empire, awarded ‘for services of special merit rendered..by men and women in manual and other work done for the war’. Recognising acts of great courage, self-sacrifice, initiative or perseverance, eleven of those honoured were women, often as a result of their work in the munitions factories. Three of them, Dolly Vickers, Lily Smith and Annie Ross, had suffered serious injuries to their hands. Others had put out fires or dealt with suspicious intruders.

Monuments to the named dead
Some women lost their fingers or hands working in munitions factories but many others lost their lives. Women who worked in munitions are under-represented in the Great War casualty figures. Since the government did its best to block news coverage of the fires and explosions that left workers dead and severely injured, the full picture of what women went through was only pieced together many years later.

Some of these women are now commemorated in local monuments. In Margravine Park near Baron’s Court in London stands a monument to eleven women and two men who died when fire swept through the WE Blake Explosive Loading munitions factory in White City just days before the Armistice was signed. The powers-that-be, worried about the consequences for their imminent ‘good news story’ decided to continue with the approach they had taken to the deaths of hundreds of other women in munitions factories and hush it up.

Fires and explosions were not the only risks. The TNT used to fill shells was highly toxic. Women found that their skin and hair was turning yellow and some of these ‘canary girls’ also gave birth to ‘canary babies’. Although the colour slowly faded, the exposure to TNT could also cause liver damage, leading to anaemia or, worst of all toxic jaundice. It is estimated that around 100 women died from TNT-related illnesses. Efforts are still ongoing to create as complete a list as possible of the ‘mutionettes’ who died.

At the other end of the recognition curve is Edith Cavell. On 12th October 1915, the experienced 49-year old nurse was executed by a German firing squad, found guilty at a court martial of helping Allied soldiers escape from occupied Belgium. Olive Edis photographed both the site of her death and her grave during her month-long trip to France and Belgium in March 1919 and Christina Broom was one of many photographers to cover her funeral in Westminster Abbey when her remains were returned to Britain. In 1920, crowds thronged to see the unveiling of a monument in her honour near Trafalgar Square and she is also commemorated with monuments in the grounds of Norwich Cathedral, where she was finally buried, in Brussels, in front of the hospital named after her and in Melbourne, to name a few.

Edith Cavell is also named alongside the men on the local war memorial in her home village of Swardeston, one of the few such instances. Another example can be found in Harrogate, where women were also named on the War Memorial unveiled there in 1923, the main reason it is now Grade II listed.

Twenty women are named in a memorial in Liverpool’s Anglican Cathedral but it is York Minster that you will find the only national monument dedicated to women of the British Empire who died in the First World War. In 1923 Helen Little, the wife of an army Colonel, was distressed to see that, while memorials were being erected across the country in the memory of the men who had died, nothing was being done to remember the women. She and her friend, Almyra Gray, decided to do something about it and started a public appeal to restore the Five Sisters Window in York Minster in their honour. They also tried to gather as many details of the women who died as they could and the names of 1,513 are inscribed in oak screens on the north side of St Nicholas’s Chapel.

Working life after the war
The Great War of 1914-18 is often perceived as having had a seismic impact on women’s employment but this is open to debate. Working class women fared badly. With no need for munitions factories after November 1918, hundreds of thousands of women found themselves unemployed. The Restoration of Pre-War Practices Act of 1919, zealously implemented by the unions despite the efforts of women like Laura Annie Willson, forced most women working in industrial roles back into ‘women’s’ jobs or out of work altogether.

Middle class women and university graduates fared slightly better. The Sex Disqualification (Removal) Act of 1919 opened up careers in law and the civil service to women and made it easier for them to join professional bodies. Before the war the vast majority of women graduating from university had gone into teaching but now they started heading into business. There was a small but significant growth of the numbers of women in all professions in the 1921 census.

The biggest impact was in the area of clerical work, which by 1921 had replaced domestic service as the single largest field of employment for women aged 18-24. However, the fact that so few men performed secretarial work contributed to a low wage environment and during the interwar years, the dream of equal pay for equal work in most fields of employment was still a long way from being realised. The early 1920s also saw many organisations implementing marriage bars, preventing women who married from continuing to work. Perhaps this is why the 1920s saw the development of so many women’s business-focused groups – the Women’s Engineering Society, the Soroptimists, the Women’s Provisional Club and the Women’s Advertising Club of London to name a few. If more progress was to be made, it would need to be a group effort.

‘Forgotten Faces’ by Caroline Corbeau-Parsons; ‘The Impact of the First World War on Female Employment in England’ by Janet McCalman (1971) in Labour History No 21 p.36-47; ‘The University Woman in Business and Industry before 1939’ in The Universities and British Industry 1850-1970 by Michael Sanderson (1972)