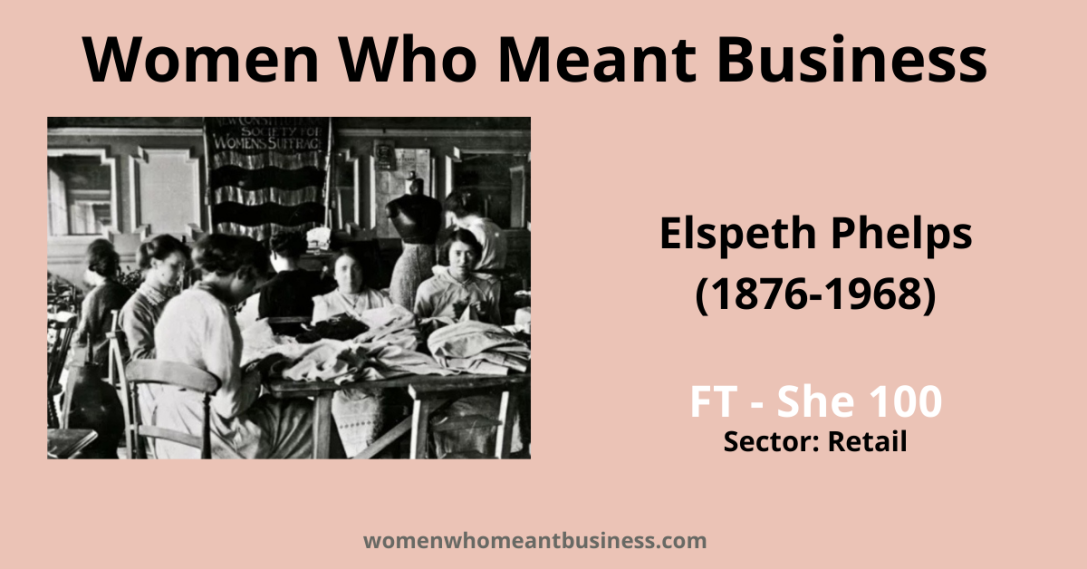 Born in Madeira on 3rd November 1876, Elspeth Phelps rose to the top of the British fashion tree in the 1920s. Now she is almost forgotten but thanks to her talent, ambition and a wide and eclectic circle of friends, she was a point of connection for bohemian London, the Bright Young Things and a burgeoning network of British businesswomen.

Elspeth trained as a dressmaker under the costumier Ada Nettleship. Ada’s elder daughter, Ida, was just four month younger than Elspeth. The two became close friends and Elspeth also developed a long-standing friendship with her husband, the painter Augustus John.

Elspeth set up her own business in 1907 at 49 South Molton Street. An ‘ardent suffragette’ she made sure she had outfits available in the colours of the Women’s Social and Political Union: a directoire gown could be made in dark purple with a white net yoke and sleeves and green ribbon edging. A dress could cost the equivalent of £3,100. She ended up in court against the Coterie’s leader, Raymond Asquith, when he defended the customer she was chasing for non-payment for a dress bought in December 1907. She won her case but the judge commented on her poor accounting habits and only awarded her half of the amount she was claiming. By October 1909 she had re-located to 28 Albermarle Street and this was where she would stay for the next 13 years.

Elspeth and Lucy Duff Gordon were direct competitors. Elspeth’s evening and wedding dresses were worn at high society events and by 1914, her annual fashion show was ticketed so numbers could be controlled. She also designed for the stage and started working with Reggie de Veulle, a former actor turned costumier, who four years later was implicated in the death from a drug overdose of the young actress, Billie Carleton. This Vogue advert, which probably dates from 1915/16, gives some idea of how busy they were.

During the war, Elspeth continued working and was particularly involved in the many shows and pageants put on to raise funds for the war effort. The most significant was the pageant she created for a glitzy fundraiser for Lena Ashwell’s wartime concert parties in December 1916. Leading designers took on different themes. Elspeth’s was the Theatre of the Nymphs, where Sheila Chisholm, then Lady Loughborough, took a leading role as Weeping Willow.

In December 1920, Elspeth married Lionel Pitt Fox, the nephew of Lord Sheffield and also a supporter of the suffrage campaign: whether they met then or not, he and Elspeth were at the same fund raising event at the Royal Albert Hall in February 1912. She was 43 and he was 60. They moved to Kent House on the Lower Mall in Hammersmith, a house recently restored and put on the market for £9m, and had brilliant parties on Boat Race day.

Elspeth made a much more successful transition to the world of post-war fashion than Lucy, better able to judge the trends. She worked with Eileen Orde on a new brand campaign, which ran in The Tatler in 1920, and with Bertram Park on fashion shoots. The press coverage of her designs and shows continued to be plentiful and positive in the early 1920s. However, she was not covering her costs. In 1923, Elspeth, now 45, sold her business to Jeanne Paquin for ‘goodwill’ and took over as the manager of Paquin’s London branch at 39 Dover Street, a first for a British woman in any French fashion house.

She carried on designing at Paquin under the Elspeth Phelps brand and was reported to be earning a salary equivalent to £286,000 p.a but this was hugely exaggerated – the real amount was nearer to £85,000 p.a. plus perks and a sales commission. In 1924, she joined London’s newly-established Soroptimist chapter and started heading over to the Criterion for a weekly lunch with other women from a range of professions. She asked to represent horse-racing rather than fashion – as Mrs Lionel Fox Pitt, her name can be found in the sports pages. In 1927, she was elected President of the London Chapter.

By late 1926, there were signs of problems at Paquin: magazines reported Elspeth’s involvement in a new shop on Sloane Street and she was appointed as a fashion advisor for the Peter Jones store on Sloane Square. Sure enough, in January 1927, Elspeth was once more in court, suing Paquin for breach of contract and seeking to recover £4,000 (equivalent) owned to her. The counter-accusation was that she had been over-charging apprentices for their training and pocketing the difference.

The available evidence does not suggest Elspeth was ever going to win employer of the month: she had a run-in with the Inspectorate of Works about her overtime practices and was fined; and there is anecdotal evidence that her special gift to single women who worked for her on their 26th birthday was that they had to start wearing a spinster’s cap in the sewing room, which is even more incomprehensible given she how late she got married. But on this occasion, Elspeth won and was awarded over £115,000 (equivalent) in damages.

She set up again in Sloane Square, backed by the Viscountess Massereene and Ferrard. now working under her married name, Elspeth Fox Pitt. She also started writing a fashion column for the Daily Mirror. At some point she sold her business to Miss / Mrs Jane Donald, who kept trading under the same name but eventually relocated the business to Oxford.

Meanwhile, Elspeth decided to branch out into hospitality. By 1933, she had moved down to Salisbury where she was running the Old Mill Club in West Harnham. Ashcombe House, Cecil Beaton’s house, was 45 minutes away so that is probably how she ended up hosting a party where Augustus John, Cecil Beaton, Alison Settle, Kyra Alanova, and Tony Mitford all ended up downing Russian cocktails together.

A year later it was Bertrand Russell’s turn to join in the fun, along with Augustus John’s daughter, Vivien. (Augustus John had sketched Bertrand Russell and Ottoline Morrell had an affair with both men.). The group had a fine old time downing more cocktails and eating goose. Elspeth is the lady with white hair in the middle of the photo.

Two years later, on 18th April 1936, the Club was raided. In May, Elspeth was fined for serving drinks without a licence and five men, including John, were fined for drinking outside licensed hours. The club was struck off and Elspeth was relieved: ‘this is no job for an elderly lady’, she admitted. Lionel died in 1937 and while Elspeth continued to live at the Old Mill, at least until 1939, there is little else heard of her until her death in 1968.