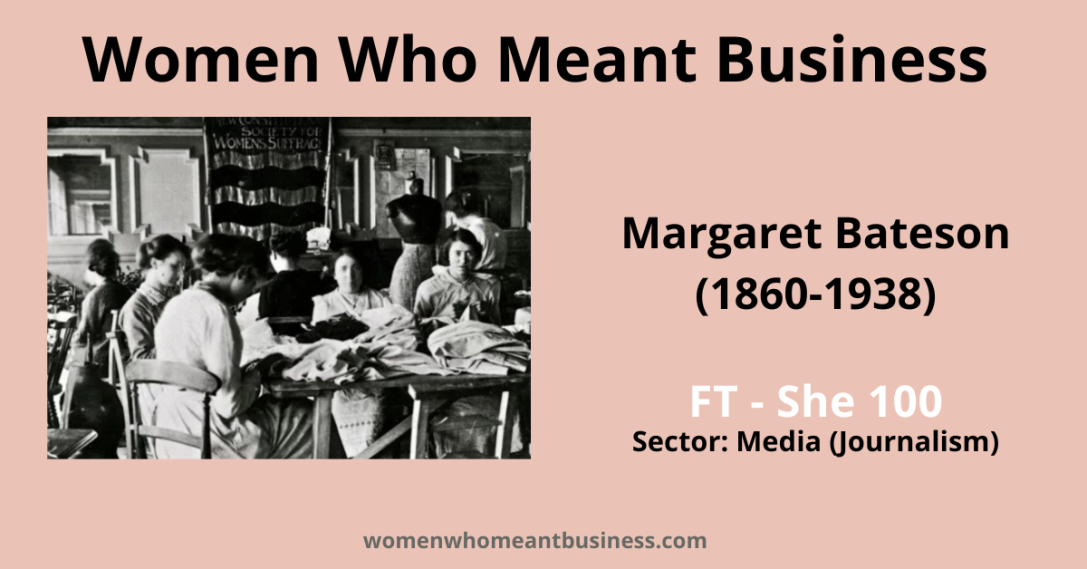 Margaret Bateson spent much of her working life writing about and involving herself in issues related to women’s employment and it is thanks to her that we have a record of the business achievements of a wide range of women during the late 1890s and early 1900s. Through her diaries we can also get a feel for what working life in London was like for a middle-class woman in the late Victorian period and in particular the issue of pay.

Margaret came from a large, high-flying family. By the time she was born, her father, William, was Master of St John’s College, Cambridge. Her parents believed in women’s education and were in a position to fund it. Margaret’s two brothers and three sisters all had careers of their own: Mary Bateson became a renowned academic at Newnham College and Edith Bateson was a sculptor. Her brother, William, became a noted geneticist and won the Royal Society’s Darwin medal in 1904 and their Royal Medal in 1920. One of Margaret’s many cousins (her father was one of seven children) was Emily Williamson who co-founded the RSPB in 1891 and to whom a statue is due to be unveiled next year.

Margaret was a pupil at Highfield School in Hendon until the age of 18 and then went to study Heidelberg. She was fluent in French and German. She returned to Cambridge do some teaching and was still living at home when her mother, Anna, set up the Cambridge Women’s Suffrage Association in 1884 with Millicent Garrett Fawcett. Margaret remained heavily involved in the women’s suffrage movement for the rest of her life and was vocal in her support of the fight for women students at Cambridge to be awarded degrees at the end of their studies

London living and life at the Queen
In 1886, Margaret made the bold decision to move to London, aged 26, and try to carve out a career for herself. She found rooms on Bernard Street in Bloomsbury for the first two years and then moved to Vernon Chambers near Holborn in 1888. and set about bringing herself to the attention of London-based publications. In mid-April 1888, she ‘took the bull by the horns’ and sent a specimen Ladies Column to 120 newspapers and magazines in London and beyond.

Only two or three days later, things came good. 27th April 1888 was ‘a day of first-rate importance in my life… Entirely unexpected by me, Miss Lowe has offered me, and I have gratefully accepted, a position on the Queen…I am intoxicated with joy!’

She immediately set about giving herself some advice, which I think has stood the test of time rather well:

“Be energetic… try to be quick to notice any..opening or improvement and prompt to put it into practice. Try with all your might not to be careless or absent-minded about matters where no ability and nothing but care is required. Do not be lazy. What occurs to you to do, do today. your ideas do not ripen with keeping. Do not talk too much. Do not confess your faults before they are committed or observed. Preserve personal dignity.”

She reflected that ‘how important [this job is] I shall only be able to estimate years hence’ but it did indeed turn out to be a pivotal moment in Margaret’s life: she would work at the Queen for twenty-five years, for the first five years as Helen Lowe’s secretary as well as the owner of the Women’s Employment section and thereafter solely driving the employment section. She also wrote for other publications including Woman’s World, The Englishwoman’s Year Book, Girl’s Realm and Girl’s Own Paper.

Margaret’s focus was primarily on the opportunities in white collar jobs – secretarial work, indexing, medicine, the civil service – during a period when secretarial work in particular was becoming an attractive alternative option for girls who otherwise would have faced life as a parlour maid. She understood all too well one of the major issues facing any woman seeking to earn a living in these professions: the low rate of pay, and wrote in her diary:

“At the present time the earnings of a woman in the highly educated class are seldom enough for her to live upon except in the poorest way and in my own case not enough for that. Employers now act on the assumption, first that a woman has some private means, and secondly that her future will in ninety-nine cases out of a hundred be bounded by marriage. For one or two well-to-do women to hope by their opposition to change the condition of the market is sheer madness. I make a note of the existing state of affairs in order to judge at some future period whether any change for the better has taken place.”

This position informed much of her public discourse and led to her attracting considerable criticism in some quarters due to the prevailing view she articulated in her private writings: that educated women had no need to enter the labour market and when they did so, they took bread out of the mouths of working women.

‘Professional Women Upon Their Professions‘
In 1893, Margaret began a series of features on working women. Over a period of two years she interviewed 25 women, nearly always going to their place of work. When she did the interviews she had in mind ‘the image of some girl who has not yet found her niche in the world. The world is before her where to choose; but she would give much gratitude to anyone who would guide her in her choice’. It was, in effect, the first careers guide for women, a fore-runner of the careers fair format many of us will have experienced, providing ‘half an hour’s talk with an experienced women who has ideas to offer about the profession towards which the girl’s own thoughts incline’.

In 1895, all the interviews were compiled, with an additional essay by Margaret herself on journalism and a concluding piece on ‘The Home Life of Professional Women.’ She wrote the preface in April and the book was published in July. It was very well received and Margaret was thrilled when the first royalty cheque arrived on her 36th birthday: “A small sum but was foolishly pleased”, she wrote in her diary.

London’s literary community
Margaret was involved in the founding of the Women Writers’ Club in 1892, a space where women writers could work and find mutual support, which attracted over 200 members in its first two years.

Bu the late 1890s, she was also a regular attendee at the Literary Ladies Dinner. Founded by Honnor Morten, both a nurse and a journalist, in 1889. Held at the Criterion, among the 22 guests in the first year were Clementina Black, Mona Caird and Amy Levy, a good friend of Margaret’s who sadly committed suicide three months later.

Some men were resentful about their exclusion, others were curious about the proceedings, many were dubious about its endurance: however good a front they put on, surely the women must have been pining in secret for the company of intellectual men who could tell they looked pretty? Without them, the dinner must have been ‘insufferably dull’.

Nevertheless, the women writers bravely put aside their need for men’s compliments and stimulating conversation and were clearly prepared to endure these boring occasions for many more years. Indeed, remarkably, despite their utter tedium, they became more popular, continuing well into the next century. In 1893, over 50 women attended what was now the Women Writers’ Dinner and in 1896, the first year Margaret is known to have attended she was one of around ninety women, including Beatrice Webb and the explorer Mary Kingsley. Further cementing her prominent role as a journalist, Margaret was in charge of the press at the International Women’s Congress held in London in 1899.

The Central Bureau for the Employment of Women (CBEW)
The National Union of Women Workers was founded in 1886 and aimed to bring together all women and organisations involved in religious, social, educational and philanthropic work. By 1896, when the tenth annual conference was held in Manchester, over 150 societies were represented and the attendance was upwards of 1,000. Margaret attended that year to read a paper on ‘Openings for the Employment of Educated Women’, where she sought to draw attention to all the areas of potential employment for ‘developed abilities’.

In May 1897, there was a meeting in London to discuss the idea of establishing a central employment bureau for women to better match supply and demand, a central clearing house for the sharing of information. Present were a number of women representing organisations that were already involved to a greater or less extent in helping educated women find work: Gertrude Jane King, secretary of the Society for Promoting the Employment of Women, Miss Younghusband, founder of the Gentlewomen’s Employment Club and Margaret’s cousin, Emily Richardson, honorary secretary of the Gentlewomen’s Employment Association in Manchester. Other attendees included Mary Petherbridge, Clara Collet and Millicent Fawcett. At the end of the meeting, an informal resolution supporting the institution of the bureau was unanimously carried.

At the annual conference in Croydon in October, the idea was further developed and Margaret volunteered to set off on a tour around various towns to scope out the demand from employers in manufacturing and commercial businesses for such a scheme. The first committee meeting of the CBEW was held on 12th November and the Bureau opened at 60 Chancery Lane on 24th Jan 1898, with Margaret as the Honorary Secretary. Its main activities were: issuing employment lists, showing situations vacant, to be put up on noticeboards in employment societies, polytechnics and schools for women; investigating potential areas for employment where little information was currently available; and later setting up a loan fund to give grants for education, training or to start new businesses.

The return to Cambridge
On 1st April 1901 Margaret married William Heitland, a Cambridge academic who was equally supportive of women’s suffrage. She was 41, he was 57. Margaret returned to live in Cambridge and re-joined the Committee of the Cambridge Women’s Suffrage Association, working alongside Helene Reynard. Among her papers is a copy of ‘The March of the Women’ by Ethel Smyth, dated 17th June 1911, so she was clearly part of the Women’s Coronation Procession, when over 40,000 women from 48 different suffrage societies marched through London. It aimed to capitalise on London being particularly busy ahead of the coronation of King George V the following week and was notable for being one of the few times when the WSPU and the NUWSS came together.

She remained fully engaged with London-based employment initiatives, taking on a range of roles at the Central Bureau for Women’s Employment: she was a member of the Executive Committee, a member of the Council, Vice Chair and finally Vice President from 1908-1913.

However, it was her original profession of journalism that she maintained the longest, keeping her column at the Queen until 1914 and continuing to write articles, mainly for the suffrage newspapers until 1926. After the First World War, she was vocal about the financial implications for women of being removed from their war-time jobs and the need for continued efforts to ensure equality in all areas of life: representation; education; employment; pay; and family relations.

Margaret’s death in 1938 went almost unnoticed but she lived to see at least one of her main aims achieved, with women now to able to vote on the same terms as men. The CBEW survived her, continuing until 1941.

‘Professional Women Upon Their Professions’ by Margaret Bateson (1895)