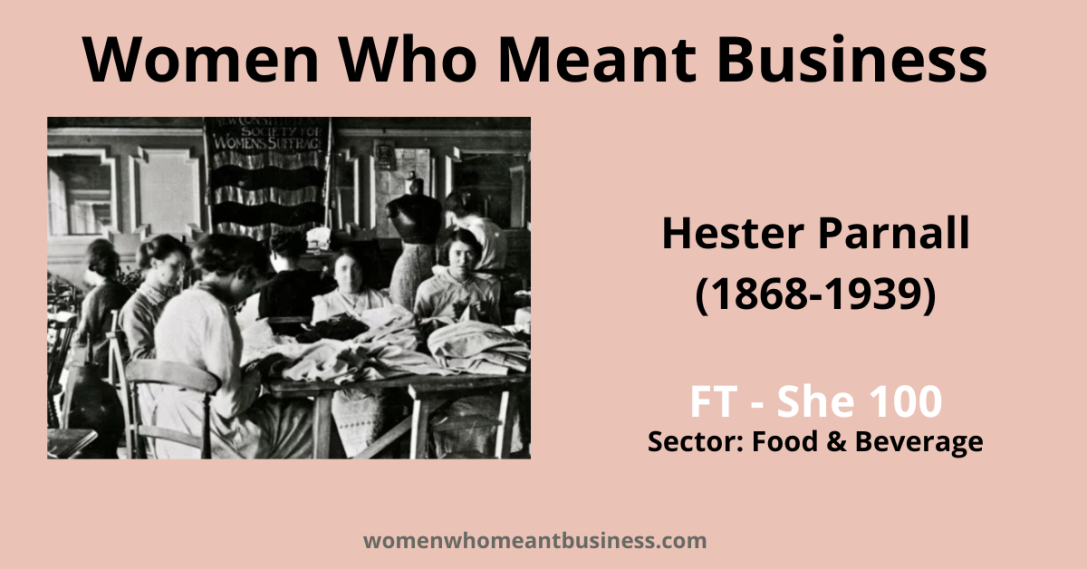 British women have long been involved in brewing.  During the days of the Anglo-Saxons women made beer at home while they baked bread. Known as brewsters, their living spaces became the earliest version of the pubs we know today.  The emergence of large commercial breweries in the 18th and 19th centuries meant that women played a much smaller role in the manufacturing process. However, since these brewing enterprises started as family businesses, eventually there were opportunities for women to step into leadership roles and one such woman was Hester Parnall.

Hester was born in St Austell in 1868, the second of six children by Walter’s second wife, Caroline, a farmer’s daughter. Walter Hicks, was an entrepreneur who, as soon as he came of age in 1851, mortgaged the farm he had inherited to set up in business as a merchant and importer of wines and spirits. The arrival of the railway in St Austell in 1859 made distribution across Cornwall much easier and Walter Hicks & Co grew and grew. In 1863 Hicks bought the Seven Stars Inn in St Austell and it was there that he learned the art of brewing.

In 1870 Walter built a brewery in the town and the company became Walter Hicks & Co: brewers and wine merchants. Clearly the business continued to flourish: the 1881 census shows Hester living in a large house with her parents, five siblings, a housemaid, a cook and a nursemaid.   In 1893 he built a new, larger brewery on the site where it still stands today.

Hester’s older brother, Walter, joined the family business and his father was able to retire but in 1911 he was tragically killed in a motorcycle accident.  Walter Sr’s younger son, George, was busy with his farm and his grandson, Gerald, was only 14. That year, Hester was made a director of the business, perhaps to give her father more support as he had to take up the reins again at the age of 82. In 1915 Gerald was killed at Flanders in 1915 and so when Walter died in 1916 it was Hester who stepped up to lead one of the largest brewery businesses in the West of England.

Hester was now 43 years old and a widow. She had married Thomas Parnall, a widower 28 years her senior in 1904 but he had also died in 1915. Perhaps the brewing business provided a welcome distraction after a year in which she had lost three members of her family for she immediately took the decision to expand it significantly, acquiring Huxtables of Newquay, a major competitor, which virtually doubled the sales. By the 1920s, the brewery’s output was close to 38,000 barrels per annum, equivalent to around 9.5m pints.

Hester was later described as ‘ruling the company with the grace of a duchess combined with the aplomb of a successful businessman’.  The story goes that the first person to spot her chauffeur-driven Daimler arriving would run and bang on the nearest set of water pipes to warn all the other staff that she was arriving, for she had high standards, sacking one member of staff for smoking while painting and another for picking up a passenger in one of the company’s vans. She was a dog-lover, travelling everywhere with a pair of Pekingeses who even sat on her desk, and seems to have been quite willing to move with the times – I have seen one photograph of her perched on a motor scooter.

In 1934, Hester oversaw another large acquisition, buying Christopher Ellis and Son’s steam brewery in Hayle along with its estate of 30 pubs.  One was the Yacht Inn in Penzance and it was here that a particularly dramatic transformation was made, with the demolition of the original pub. In its place rose an Art Deco masterpiece designed by Colin Drewitt, complementing the Jubilee pool which was finished the previous year.

During the period that she was Chair, Hester added nearly 80 pubs and hotels to the portfolio and put a third storey onto the White Hart Hotel in the centre of St Austell, which her father had bought in 1911. It was also while she was in charge that the company changed its name from Walter Hicks Ltd to the one it still holds today, the St Austell Brewery Company.

A general manager oversaw the day-to-day business operations, which meant Hester also had time to taken on other roles in the community and spend some the cash that the brewing business was generating. In the spring of 1926 she took over the tenancy of the grand house of Tregrehan near St Austell.  She was an enthusiastic supporter of the Conservative party and when Stanley Baldwin made a visit to Cornwall in June 1927, it was in the grounds of Tregrehan that he made his major speech. Around 25,000 people came to hear him, pouring by coach and car from across Devon and Cornwall.  Hester was one of the first women to be a magistrate in Cornwall and in 1931 she became President of the West of England Bandsman Festival. The patron was HRH Prince of Wales and it said that Hester hosted him and Wallis Simpson at Tregrehan.

In 1935 the owners of Tregrehan returned to take up residence. Hester bought Point Neptune in Fowey, later the home of Dawn French and Lenny Henry.  It required extensive refurbishment and she only lived there for two years, dying in 1939 at the age of 71. Three weeks earlier she had handed over the management of the company to her nephew, Egbert Barnes.

St Austell’s now has a woman as its master brewer, and over 70% of the hotels, bars and inns it supplies are run or co-run by women.  It continues to celebrate the women past and present who have contributed to the business through its product development.